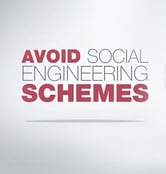 Social engineering fraud (SEF) is a type of fraud that’s become increasingly common over the last several years. However, even though many instances of this fraud transpire over email communications, it’s a company’s crime policy—not a cyber policy—that would often provide coverage in the event of an SEF loss.

That’s why it’s especially important to understand your crime policy, how it might cover SEF, why it might not, and what endorsements you might want to obtain to make sure SEF doesn’t leave your company exposed.

It may seem counterintuitive, but SEF is usually not covered by a cyber policy. Even though this fraud often involves emails and wire transfers, cyber policies are not designed to cover them:

There are a number of variations on the theme, but most instances of SEF involve the following elements:

A standard crime or fidelity policy contains a few provisions under which an SEF claim might be filed:

Depending upon the specific language and definitions laid out in the crime or fidelity policy, the insurer might argue that SEF is excluded from coverage for a number of reasons:

Because of this potential gap in coverage, some carriers have started offering SEF endorsements to their crime and fidelity policies. The insurance agreements might go by different names, but they’re all intended to make limits and liabilities explicit for both the insured and the policy issuer.

These endorsements are only offered by a handful of carriers, but with the increasing prevalence of SEF, more are likely to follow. To learn more about SEF, we have resources available for you. Ask about our “Risk Insights: Social Engineering” as well as “Risk Insights: The Fake President Fraud.”

And, to discuss your coverage options and learn what options are available to you, contact Clarke & Sampson, Inc. today 703.683.6601. Or click the button below to fill out a online contact form!