Tips For Keeping Your Family Safe During a Tornado 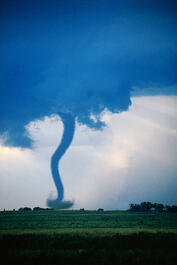 Tornadoes can be one of nature’s most violent storms and have the potential to cause serious damage to a community and its infrastructure no matter the reported danger level. Last week on Wednesday October 15th the Washington D.C. Metro area experienced two tornadoes touching down, with one happening right in Alexandria. Tornado warnings were issued promptly in surrounding areas when winds and rain picked up to severe levels. The first touch down was reported around lunch time in Belle Haven – about an hour later a second tornado reportedly touched down near Savage, MD. Fortunately, both occurrences resulted in little to minor damage; however it was unusual for a tornado, let alone two in the same day, to even be an issue in our region around this time of the year. These recent events have shown that even out of prime “tornado season” people should be wary of the possibility of a tornado striking. What is most likely causing out of season tornadoes such as these are shifts in weather patterns potentially due to climate change. The most important thing you can do to be prepared for facing the danger of tornadoes is to plan extensively what to do before, during, and after a tornado hits. Here are some pertinent tornado safety recommendations for you and your family:

Before a Tornado Strikes

Signs of an Impending Tornado

In addition to listening to weather reports, the following signs may indicate that a tornado may be near:

Stay safe after the tornado hits by doing the following:

In addition to insuring your home, ensuring your safety and preventing losses are also top concerns. If you would like more loss prevention or safety tips, please click on the button below or call us at (703)683-6601.